“Kidnap me pls”: how Netflix’s hit series ‘You’ not only romanticises the twisted stalker Joe, but all of the men manipulating and abusing their partners.

The hit Netflix series ‘You’ has taken social media by storm with hundreds of teenage girls expressing their love for the toxic and abusive main character, Joe, with some as young as 15 taking to social media platforms such as twitter to beg him to kidnap them! This exposure to emotionally abusive behaviour is normalising and romanticising its existence, predisposing and drawing young women to toxic relationships later in life.

With this in mind, we must question, why isn’t Netflix recognising the damage that such a high profile series is potentially inflicting, and why isn’t it attaching trigger warnings and helplines for those who have been, or are, in the same position as Beck?

Visual ethnography was used as an analytical tool when looking at the visual criminology of ‘You’ as it enabled the researcher to zoom in and out of the images to interpret their socio-political location using the three steps identified by Van de Vorde (2012), while also being able to see the image in a two-dimensional perception to see how the viewer digests the information being fed to them. By being able to understand how the viewer interprets the content they see, the researcher is also able to have a better understanding of how the media and crime shape each other, also known as loops and spirals, a notion coined by Ferrell et al (2015). The importance of loops and spirals as a theory are integral to the visual ethnographic analysis of data as the deep interrogation of an image is incomplete without the understanding of its ability to alter society. In the context of Joe Goldberg, the main character in ‘You’, the comprehension of his ability to influence the behaviour of others in society is essential to understanding how to help victims and/or prevent further cases of emotional and physical abuse within relationships.

‘You’, not dissimilar to other Netflix series, is a collection of dramatised audio-visual representations of what we are encouraged to believe is real life. However, it can be argued that our inability to escape new digitised media has meant that as media consumers, we are unable to distinguish the difference between real life and unreal images within media (Carrabine 2012: 463). Technological advancements within the twenty first century mean “we do not merely live with media but in media” (Deuze, 2012:618).  Due to this, it could be suggested that society, and the crimes within it, are more vulnerable to being shaped by the media. 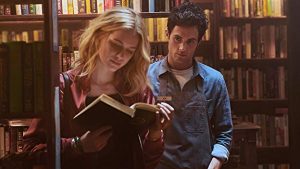 The first analysis that can be made from the series is that Joe has an audio narrative. While this lets the viewers believe that Joe is a vulnerable character – as they can hear what he is thinking and so believe that he has nothing to hide – zooming into the content of this aspect shows that the narrative is an indirect voicing of the show’s own problems. For example, throughout the series Joe’s narrative is heard saying phrases that point out problematic behaviour in society and their associated worries, such as “…what if some sicko had followed you down here?” (“Pilot”, 00:33:18-00:33:25) and “How dare she invade your privacy like that!” (“Amour Fou”, 00:20:15-00:20:32), while ignoring the parallel behaviour seen in Joe. When zooming out to see the meaning behind this scripted narrative, the researcher was able to conclude that the narrative mirrors manipulative and misguiding behaviours seen in the perpetrators of emotional abuse. This behaviour is often missed as a red flag as it is disguised as caring and therefore enticing behaviours, which eventually cause separations from the victim’s support outlets (Loring 1994). This is because those close to the victim are able to see the manipulation while the victim is only able to see the caring side of said behaviour. This effect can also be seen within the reaction of the audience, as the manipulation of Joe’s narrative lulls us into a false sense of security and trust. While this may be the aim for the creators of the show, who later reveal an even darker side to Joe, the consequences of Joe’s manipulation may also seep into the lives of the viewers. This is because the media has shaped a vision of what people want to see in a partner and so when entering into a relationship, we are conditioned into misreading red flags as concern and kindness.

Throughout the series, we see a number of secondary characters encouraging and reinforcing the unhealthily obsessive behaviours we see in Joe. For example, Ethan, Joe’s co-worker, says “I would be googling the hell out of her right now” (“Pilot”, 00:04:34-00:04:29).  While these subtle script inputs may be simply to progress the show, this encouragement mirrors the casually abusive approach that men have towards women within society. As a result, viewers seeing this within the programme, like Joe, will have their behaviour reinforced. Within a society where people’s personal information is readily available at our fingertips through the use of social media, it is important that societal institutions positively influence our usage of said media. Changes to attitudes, beliefs and values of the treatment of women will change if society sees a similar change within structural media institutions. Such changes should challenge the misogynistic views and attitudes adopted by vast groups of people, manifested through the violation of privacy and perceived views of their right to do so.

The continuation of misogynistic views and casually abusive behaviour within society is reinforced not only by the media, but also by other authoritative institutions such as the Criminal Justice System. While there is legislation that protect against the violence and harassment of women (Protection From Harassment Act 1997, and Domestic Violence, Crime And Victims Act 2004), attitudes within courts by judges, and by those within the police force often prevent women from reporting such offences. This is because many reported cases of stalking that are later linked to abuse, are not taken seriously by police, leaving women to call the emergency services numerous times out of fear, in the hope that they will eventually be noticed (Elliott 2019). In cases where offenders have been to court, it is not unheard of for the judge to trivialise offences of stalking and emotional abuse as “jealousy” (Waldron 2019), rather than recognise the seriousness of the act and understand the debilitation inflicted upon the victim.

Courts are also well known to shame the victims and impose blame for what happened to them. For example, an Irish court presented the underwear of a 17 year old girl who had been raped (Sherwood 2018). The perpetrator was later acquitted. While this caused a global outcry, similar, more subtle actions are made daily throughout society that push the blame onto the victims and lead to the perpetrator being let off as their action is no longer seen to be a choice, implying that a woman is the ‘ideal victim’ (Christie 1986). This can also be seen throughout ‘You’, with Joe’s narrative justifying all of his actions. For example, Joe suggests that Beck is inviting people to stalk her when his narrative says “All accounts set to public. You want to be seen, heard, known” (“Pilot”, 00:07:32-00:07:36). While it is no crime to look at people’s social media accounts, Joe quickly demonstrates an insatiable obsession that he attempts to separate from free will. Within the wider context on society, this can not only be damaging in regards to the encouragement of similar behaviour towards women, but it is also damaging to the young users of social media who are exposing themselves to people who believe they are being invited into obsession. For the few cases that have disastrous outcomes, perpetrator’s beliefs of the lack of freewill are then even further reinforced by the criminal justice system. To remove society and the young users of social media from this cycle of victim blaming, media outlets must accept the responsibility to make shows and series that demonstrate healthy and positively reinforced relationships.

Now you may be asking, Joe is shown spiralling from obsession, to murdering Beck, so why would behaviour even remotely similar to this entice someone?

In a society where loyalty is hard to find – given the excessive divorce rates among the parents of millennials and generation Z (ONS 2018) – girls everywhere have an idealised version of a relationship where their partners are obsessed with them and only them. The running theme of this show reinforces the idea that obsession is the only way to show love. By this show portraying deviance in such a positive way, young girls captivated by the idea of devotion are lead to idealise the unhealthy and toxic behaviours demonstrated by Joe, and they are willing to justify any red flags because they are so desperate for their partners to love them. Such ideation has been seen in the reactions to the show, with comments appearing on social media expressing their love for Joe, begging for someone to love them the way Joe loves Beck, and for Penn Badgly (the actor playing Joe) to kidnap them. Romanticisation of Joe’s character can be seen in both genders when looking at the reaction posts on social media, as males have been comparing themselves to Joe and promising to be like him for the next woman he’s interested in (seen in the examples below).

Regardless of Badgly’s attempts to discourage the romanticisation of Joe Goldberg and his manipulative behaviour , it can be argued that the damage has already been done. While arguments can be made that the series has illuminated the subtle methods of manipulation that lead to such abusive relationships, arguments can also be made, pointing out the lack of attempts to discourage such behaviour. Due to this, evidence that the show has influenced the way people view relationships is abundant across social media. Negative reinforcements made by the show have already shaped the way men behave towards women, with girls on dating apps now finding men promising to “be their Joe Goldberg”. This influenced behaviour is proof of Ferrell et al’s theorised loops and spirals, confirming to structured and authoritative institutions, especially the media, that it’s time to change the way that we portray relationships to prevent fatalities at the hands of abusive partners, as well as preventing the continuation of the cycle that justifies manipulative behaviour. Society’s obsession with falsely romanticised behaviour needs to be quashed, before all of the young girls watching shows like ‘You’, who think that this manipulation is normal, grow up to be victims of stalking, emotional abuse and domestic abuse.

ONS, (2018), How Do The Post-World War Baby Boom Generation Compare?, Avaialable at: https://www.ons.gov.uk/peoplepopulationandcommunity/birthsdeathsandmarriages/ageing/articles/howdothepostworldwarbabyboomgenerationscompare/2018-03-06 [Accessed on 9th May 2019]

Waldron B., (2019), Stalker Compared To ‘Jealous Teenager’ After Trying To Climb Through Ex-Partner’s Window, Daily Telegraph, 29 April, Available at: https://www.derbytelegraph.co.uk/burton/court-derbyshire-magistrates-niki-dyche-2796371?utm_source=twitter.com&utm_medium=social&utm_campaign=sharebar [Accessed on 8th May 2019]